When I started working at SEPS it was with ‘gifted and talented’ children; my ICT-related skills were earmarked to cater for the higher order thinking of more able children. This may well be a legitimate expenditure of school funds, however, my personal interest lies with the less able children and my conviction that digital processes can to some extent stimulate their heretofore dormant gifts and talents.

After two years of film-making experience, 14 year old Bob from LNS, has this to say on simplicity in film making:

“If I simplify the story then if I make it sort of  simple enough then I can make it look more advanced in the way I shoot it, if you have a simple enough story then like you can make really good and fantastic shots around it, and make the film sort of… elevated in a way”

Bob understands that cinematic representation is not all about overt showing and literal telling. Recalling Bergala’s hiding/revealing theme, it’s about the thoughtful and tightly wrought crafting of a scene. With ‘film-maker as manipulator’ in mind, I attended the 2010 LATE (London Association for Teachers of English)/BFI Conference on ‘Re-framing Poetry’, where Michael Rosen presented the case for the learning that can come from Performing a Poem and filming it with simple gestures.

I took this a step further and had a small group of SEPS Year 6 children with low literacy skills editing their own performed poems with I-Movie. The children had been studying the World War 2 Evacuation and had written a short poem from the evacuee’s point of view. We had sourced photographs, found web movie footage and most groups had produced a shot list from which they created a moving image representation of their poem. We discussed camera distance and the use of visual metaphors to express certain concepts and emotions. For example, Taylor came up with a close-up of hands fumbling a tissue for sadness and receding footsteps for saying good-bye.

Chloe, Elijah and Tyler’s filmed poems, accessible here, are good examples of what can be achieved with traditional literacy input and some technical guidance, but mainly with these children’s existing understanding of the medium of film and their capacity to be social and supportive. 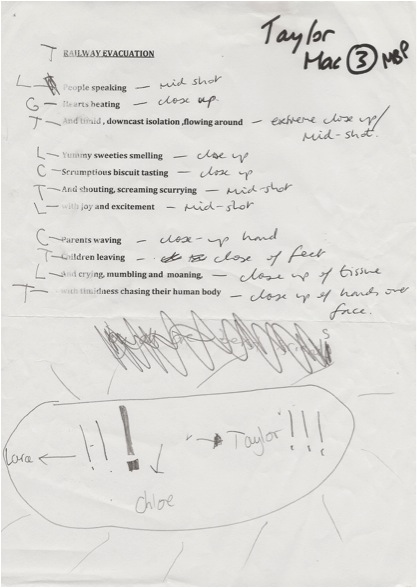 "Tell me and I forget. Teach me and I may remember. Involve me and I learn."